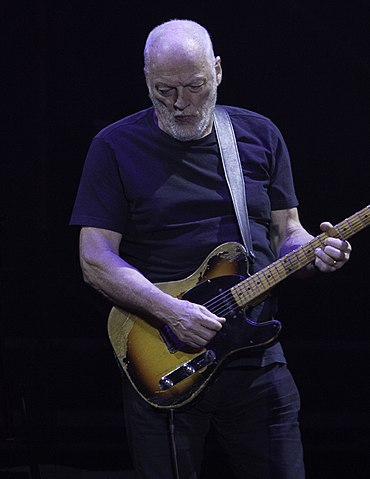 Gilmour joined Pink Floyd as guitarist and co-lead vocalist in 1968 shortly before the departure of founding member Syd Barrett.  Pink Floyd achieved international success with the concept albums The Dark Side of the Moon, Wish You Were Here, Animals, and The Wall.  By the early 1980s, they had become one of the best-selling and most acclaimed acts in music history; by 2012, the band had sold more than 250 million records worldwide, including 75 million units sold in the United States.  Following the departure of Roger Waters in 1985, Pink Floyd continued under Gilmour’s leadership and released three more studio albums.  In 2011, Rolling Stone magazine ranked him number 14 in their list of the greatest guitarists of all time.  He was voted number 36 in the greatest voices in rock by Planet Rock listeners in 2009.