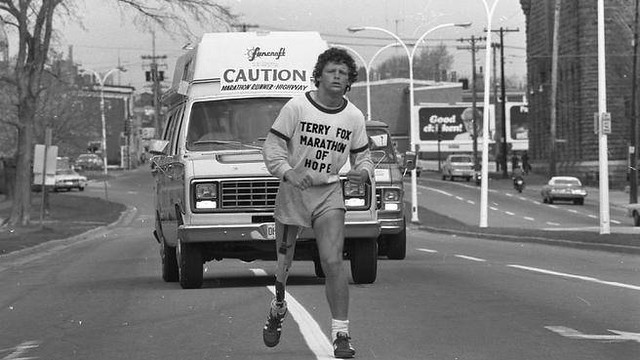 In 1980, with one leg having been amputated due to cancer, he embarked on an east to west cross-Canada run to raise money and awareness for cancer research.

Although the spread of his cancer eventually forced him to end his quest after 143 days and 5,373 km, and ultimately cost him his life, his efforts resulted in a lasting, worldwide legacy.

The annual Terry Fox Run, first held in 1981, has grown to involve millions of participants in over 60 countries and is now the world’s largest one-day fundraiser for cancer research; over C$750 million has been raised in his name, as of January 2018.

In addition to being the youngest person ever named a Companion of the Order of Canada, Fox won the 1980 Lou Marsh Award as the nation’s top sportsman and was named Canada’s Newsmaker of the Year in both 1980 and 1981.

Considered a national hero, he has had many buildings, statues, roads, and parks named in his honour across the country.